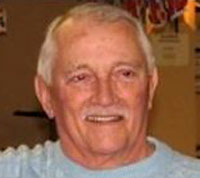 Burton Fingar, 43, of 222 Lawrence St., Penn Yan, was issued an appearance ticket by Penn Yan police at 6 p.m. Saturday after he allegedly assaulted a neighbor, William Whitbeck of 214½ Lawrence St. Fingar, who was charged with third degree assault, is alleged to have gone to the Whitbeck house, provoked an argument and refused to leave. Whitbeck said Fingar hit him several times in the face during a resulting fight between the two men. Fingar is scheduled to appear before Village Judge Robert Nielsen on April 29. - Finger Lakes Times April 24, 1978 page 8

Per his wishes, there will be no formal funeral services. There will be a memorial service on Saturday, July 27th, 2013, at 1 pm at the Penn Yan Moose Lodge on East Elm St., Penn Yan, NY.

Burt worked as a union carpenter for many years, and in 1985 established his own business, "The Wood Doctor", which he operated until his retirement.

He was a member of the Sons of the American Legion, a lifelong member of the B.P.O.E. Elks Lodge, the Seneca Lake Duck Hunters, and Penn Yan Moose Lodge #2030, where he held several offices including Governor.