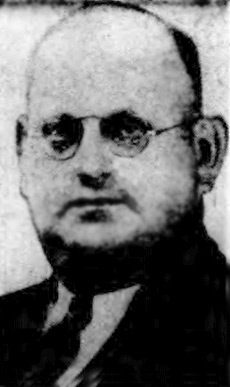 Mr. Moebius bought his first truck in 1921 and organized Dump Truck Service, Inc. in 1926. Since then it has grown to one of the largest dump truck services between New York City and Chicago. In 1929, he erected a warehouse, shop and yards at the Wecker St. address and in 1930 added builders supplies under the name Charles T. Moebius, Inc.

For many years, Mr. Moebius conducted an annual fall ox roast attended by as many as 500 persons.

In Construction Business Born April 29, 1887, he was graduated from School 8 and attended Trinity Old Lutheran School and Buffalo Technical High School. Before going into his present business, he was employed by the Ernst Construction Corp., 75 Lathrop St. and for five years was shop foreman for August Feine & Sons Co., Inc., 140 Lower Ter.

He was a member of Ismailia Temple, A.A.O.N.M.S.; Buffalo Consistory, Royal Order of Jesters, Buffalo Court No. 2; Zuleika Grotto, Hugh dePaynes Commandery, Ahl Bedoo Club, Improved Order of Red Men, Alpha Lodge, I.O.O.F.; B.P.O. Elks, Boreal Club, Circus Saints & Sinners Club, the Automobile Club of Buffalo, and the Engineering Society of Buffalo. The Lodge of Ancient Landmarks, F. & A.M., No. 441, of which he was also a member, will conduct Masonic services tomorrow night at 8 at the Carlton A. Ullrich Funeral Home, 3272 Bailey Ave.

A nephew, the Rev. John C. Moebius, minister of the South Buffalo Lutheran Church in Culver Rd., will conduct final rites at 2 Tuesday afternoon in the funeral home. - Buffalo Courier-Express April 29, 1956
Charles T. Moebius. 68, head of DUTDD Truck Service Inc and Charles T. Moebius Inc. since the concerns were formed 30 years ago, left the bulk of his estate, valued nominally at more than $165,000, to his wife, Mrs. Elizabeth Moebius, 10 May Fair Lane, in a will filed yesterday.

Mr. Moebius, who died April 28, provided that a trust fund of $150.000 be established with the income to go to his wife. In addition, he left her $10,000 outright as well as the contents of the May Fair Lane home and their house in the Town of Holland. - Buffalo Courier-Express May 5, 1956.