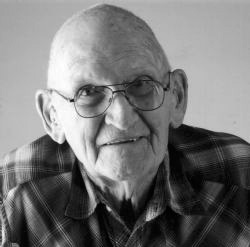 
LC Finger of Kerrville, TX passed from this life on Monday, July 13, 2015 to spend eternity with his lord and savior. He was born on May 26, 1924 in Garner, TX to Henry Olie and Bessie Knight Finger.

LC married Anna Louise Warren on September 2, 1943 in Bennettsville, SC where he was stationed. He served in the Army Airborne as an aircraft mechanic and paratrooper in the South Pacific. He was awarded the Purple Heart after losing his right leg in combat. LC never let his handicap slow him down as he worked as an aircraft mechanic in various cities across Texas for 20 years. He enjoyed camping, fishing and especially hunting all of his life. He became a master knife maker, often using deer antlers in his craft. Many were the grateful recipients of his beautiful knives.

LC married Aleta Kingen on June 6, 2006 and they enjoyed being able to travel some and later enjoyed staying in their home together until LC became a resident of Hilltop Nursing Home in January of this year. Even there, he befriended everyone and loved to visit with the other residents and tease the caregivers.

He was an active member and Past Master of the Masonic Lodge, holding membership in the Millsap Lodge # 1265, A.F. & A.M., the Palo Duro Lodge # 1339, A.F. & A. M., and the Kerrville Lodge # 697, A.F. & A. M. LC was also was a faithful member of First United Methodist Church of Kerrville and enjoyed the Keystone Sunday School class for as long as he was able to attend.

He is preceded in death by his parents and wife, Anna.

Those left to honor and cherish his memory include his wife, Aleta Finger of Kerrville, TX; sons, Steve Finger and wife Jackie of San Antonio, TX, Kenneth Finger of Weatherford, TX; granddaughter, Rebecca Hill and husband Darrin of Bryan, TX; grandson, Jonathan Finger and wife Lauren of Abilene, TX; great-granddaughters, Daylynn Hill and Darian Hill, along with many other relatives and friends who will miss him dearly.