Found a passport application for a Gilbert H. Finger that says he was born in Saugerties, NY on May 10, 1842.


Gilbert Finger, a former resident and brother of the late Henry L. Finger, Bryan and Jeremiah Finger of Saugerties, died in Hughsonville, Dutchess county, on Monday morning. The body will be brought to Saugerties for burial in Mountain View cemetery on Thursday. Mr. Finger had been a resident of New York for a number of years, but of late had made his home in Hughsonville. - The Kingston Daily Freeman February 9, 1916 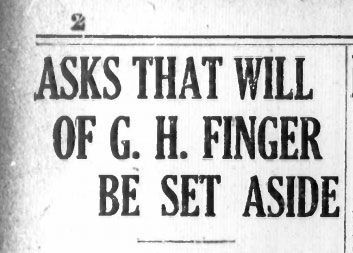 Alleging fraud, unsoundness of mind, illegality and undue influence, Robert B. Custree, of the village of Ballston Spa, Saratoga County, today filed a petition with Surrogate Daniel Gleason to have the will of Gilbert H. Finger, of this city set aside. Custree, a nephew of the dead man declares that the estate of $3000 personal property, was willed to Daniel Finger, of Poughkeepsie, through the influence Finger brought to bear upon the mentality, of his brother, Gilbert Finger.

The Saratoga County man asks that the proceedings be dismissed with costs and that the $3,000 estate be divided among the fifteen nephews, fifteen nieces and one brother, who are all heirs-at-law. Divided among the 31 expectant heirs, the estate would give something like $96 to each.

"I, Robert B. Custree, nephew to the deceased, heir-at-law and next of kin, claim that the will filed in this court, dated January 21st, 1915, was not the last will."

"The will was not duly executed, published and declared."

"On January 21st, 1915, Gilbert H. Finger was not of sound mind and mentally incapable of making a will."

"The execution of the alleged will, if the same was ever executed, by the testator, was secured by fraud and undue influence, whereby the interest and purpose of the testator in making the testamentary disposition of property was overcome and destroyed and the desires and purposes of Daniel Finger, the testator’s brother, and Etta Finger, one of his nieces, were substituted."

The dead man’s will leaves all his property to "Daniel Finger, my well beloved brother." In case of Finger's death it is provided that all the property shall go to his wife, Etta Finger.

The fifteen nephews and fifteen nieces are scattered all over the country. - The Evening Enterprise April 17, 1916