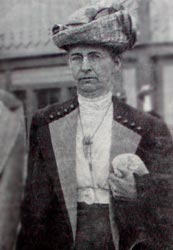 
The death of Mrs. Mary Fingar Miller, widow of Morris Miller, a well known resident of Germantown, occurred this morning at an early hour at the home or her daughter, Mrs. A. Howard Fingar, in Greenport, where she had been residing. Mrs. Miller was born in Germantown, the daughter of James and Margaret Dick Fingar and had many friends there who will regret to learn of her death. She was a member of the Germantown Reformed church and of the King's Daughters and the Missionary society of that body. Mrs. Miller is survived by one daughter, Mrs Howard Fingar, and by two sons, Stanley Miller of Germantown and Raymond Miller of Madalin.
- Hudson Evening Register January 23, 1941