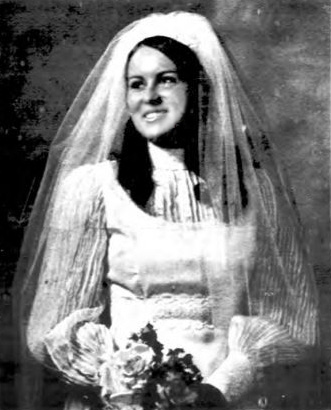 The bride is the daughter of Mr. and Mrs. Henry R. McCarthy of 25 Highland Dr., Marcellus, and the groom's parents are Mr. and Mrs. Kenneth Finger of Rochester. Officiating at the ceremony was the Rev. Alfred Wangman.

The bride, who was given in marriage by her father, wore a sat de peau gown with a tucked bodice, long sleeves, full skirt and train. The gown was trimmed with lace on the cuffs, neck and waist. She carried a bouquet of white and yellow sweetheart roses. Matron of honor for her sister was Mrs. Richard Brown of Arlington, Va. Four other sisters of the bride, the Misses Deborah, Sandra, Linda and Melissa McCarthy, served as bridesmaids.

After the ceremony, a reception took, place at the Pine Tree Point Club, Alexandria Bay. Following a wedding trip to Washington, D.C. for a week, the couple will be at home at 46 Augustine St. in Rochester.

The bride is a graduate of Marcellus Central School and the State University at Oswego. The groom, a graduate of Arcadia High School in Greece, N.Y., attended Mohawk Valley Community College and is employed as consultant by Cook Iron Store Co. in Rochester.
Pam Finger also reported in. She, Dave, and Jennifer are settling in there new home in Baldwinsville. David was promoted to regional sales manager for his company and they moved from Rochester to Baldwinsville in November, just in time to celebrate Jennifer’s first birthday, Nov. 17 Jenny is a lucky girl. She had two birthday parties, one with grandparents, Grace and Ken Finger, and one with grandparents Gene and Hank McCarthy. Uncle Jim Finger made a trip from Rochester to see his niece and the new Finger abode. - Thousand Islands Sun December 14, 1978