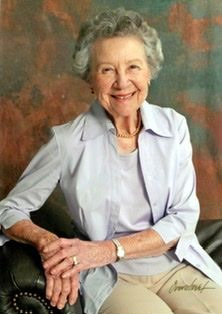 
Mary Emma Finger Ellis Knapp was the sixth of 11 children born to John M. Finger and Emma T. Rothe Finger Raised in Hondo, Texas she had many stories of growing up in this rambunctious and fun-loving clan included happy visits to the Rothe Ranch in nearby D'Hanis, card games and spontaneous dance parties persisting into the wee hours, and the multiple loaves of bread her mother baked daily to feed not just the family, but extended family, friends and neighbors who were always welcomed. She was a graduate of the now named University of the Incarnate World in San Antonio, where she majored in music. In later years, she added her striking soprano to the Noted Offutaires, a popular officer's wives' choral group at Offutt Air Force Base in Nebraska.

The quintessential Air Force wife, Mary Emma served side by side with her husband Jim, for his 37 year career, and making base quarters into home in places as far flung as Goose Bay, Labrador; Torrejon, Spain, and Seoul, South Korea

When not busy with many duties of a general's wife, she could be found passionately competing (and usually winning) on the golf course or at the bridge table.