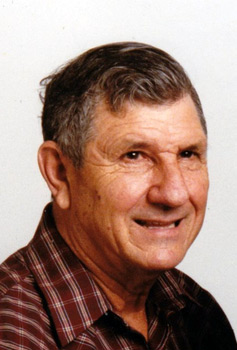 He is listed as Bernard Thomas Finger in his sister Rose's obituary. - 2012


Bernard Thomas "Tommie" Finger passed peacefully home to His Father Our Savior on Thursday morning, April 11, 2013. He was born August 4, 1927 to John and Emma Rothe Finger in Hondo, TX, the youngest of 11 children.

Tom graduated from Hondo High School in 1946. He then attended Sul Ross State University in Alpine, TX and Southwest Texas Junior College in Uvalde prior to deciding to serve his country. Tom joined the Navy in 1953, served for four years then transferred to the Air Force in 1957, from which he retired as a Staff Sargent in 1973. During his Air Force service, Tom was particularly proud of the time he helped maintain Air Force One for President Lyndon Johnson at Bergstrom AFB. After completing his military service, Tom worked for the University of Texas at Austin for 14 years, after which he led a life of retirement.

Tom married the love of his life, Dorothy Ray Mansfield Finger, on June 11, 1961. They raised their four children Michael Douglas, Lisa Gaye, Roxanne, and Charles Thomas in Texas and Washington State. Tom was a kind, loving person who always put the comfort and well-being of others before his own. His passing leaves a deep void in the hearts of family and friends.

Tom was always passionate about baseball and football, and loved to tell stories about when he played baseball and football for the Hondo High Owls and with the Highway 90 baseball league. In fact, he continued to check the Owls' sports news in the Hondo Anvil Herald up until his death. His other favorite teams were the Texas Longhorns, Dallas Cowboys, Texas Rangers, and Houston Astros. For many years, Tom loved to hunt the Finger family land and he found fishing at his wife's parents' farm in Manor very peaceful. His other enjoyments were playing card games, Rooke and Solitaire, and Dominoes.