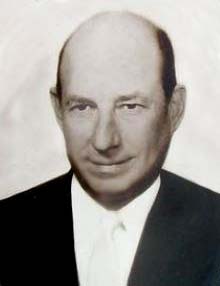 
Aaron L. Finger, 87, passed away November 16, 1993 at his home in Fort Worth, Texas. Mr. Finger was co-owner of Finger Furniture Company, along with his brother Sammy Finger.

Aaron Finger was the second of six children born to the late Sam and Annie Finger in Shephard, Texas, on March 17, 1906. At an early age, Aaron went into business with his older brother Hyman in Daisetta, Texas. In 1936, Aaron moved to Houston to join his father and brother in the furniture business. In 1962, he moved to Fort Worth where he established Finger Furniture Company.

He belonged to the Elks Club and Scottish Rite. He was a Shriner and a Thirty-second Degree mason. Mr. Finger received the Human Relation Award in Chicago from the American Jewish Committee in 1984. He also received the Johnny Shilling Special Friendship Award in Dallas in 1989.
He belonged to the Ahavath Shalom Synagogue of Fort Worth and Beth Yeshurun Synagogue of Houston. Mr. Finger resided in Fort Worth with his wife Pat.