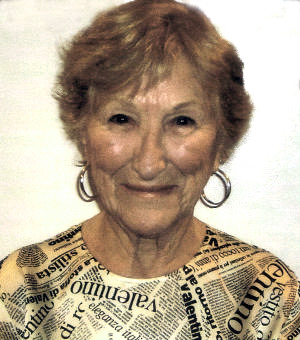 
Martha A. Fingar, 89, of Germantown died Tuesday June 4, 2013 at Columbia Memorial Hospital after a long illness.

Born March 21, 1924 she was the daughter of the late Anthony and Helen (Jankowski) Shultz.

After graduating from High School Martha joined the Coast Guard, where she trained as a Radio Communications Specialist.

Martha had a zest for life. Making many beloved friends along the way. Her passion was volunteering at her church, St. Paul's Trinity Parish of Tivoli, where she worked for many years at a clothing boutique called 'The Carousel'. She volunteered as a 'Pink Lady' at Columbia Memorial Hospital, and was a Girl Scout leader. Martha enjoyed playing bridge and Gin Rummy with her friends, was very active in the Young Republican Club, and served as First Mate on their boat, The Lorinda III.

Surviving are her loving and devoted husband Peter F. Fingar, her loving natural children, Jacqueline Caragine of Germantown, Martin Schultheis of St. Petersburg, Fla, Albine Wilhelmina Stoddard of West Taghnanic. She had been blessed to include in her life Peter's children, David, Gregory and Mark Fingar and Lorinda Rausch as well as many grand children and great grandchildren. - Register-Star June 6, 2013